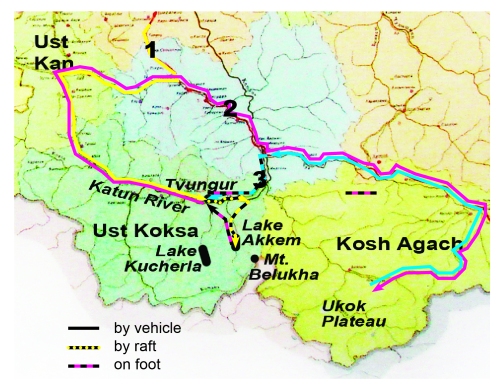 Carol Hiltner, was first called to be a bridge for the energy of Altai (which is known as the “umbilicus of Earth”) in 2001.

2011 Trek: In 2011, Carol was guided to organize an international trek from Tyungur Village to sacred Mt. Belukha from July14 – August 4, 2011.  As messages came through, she became aware of a gate/portal opening in the Altai, all the trekkers chose to stay for the Second Wave. Thus, the role of the Trekking Group morphed, as guidance was received, into a “task-force” not only to do ceremony at Mt. Belukha, but also go on the sacred Ukok Plateau meeting the Koji Mamos who came all the way from their sacred mountains of the Sierra Nevada de Santa Marta in Columbia through China to join in work there. The group then trekked back along the Katun River to Tyungur to meet the Second Wave.

Second Wave members met in Novosibirsk on August 7th, 2011 and went directly to Tyungur, joining up with the Trekking Group. At the site of a traditional healing center near Tyungur, near the place where the Akkem River flows from Mt. Belukha and enters the Katun River, ceremony was done as guided to send the life force coming through the opened gate out onto the planetary energy grid. The ceremony began at 11:11 pm Novosibirsk Time (which is just past noon EDT) on Saturday, August 13, and continued for a week with Altai natives.

Grounding Groups all over the world joined in ceremony at the same time to ground the Altai energy into the Earth.

The Fellowship returned home around August 26th. Information about this group was posted in the “Second_Wave” and “Logistics” categories in this blog.